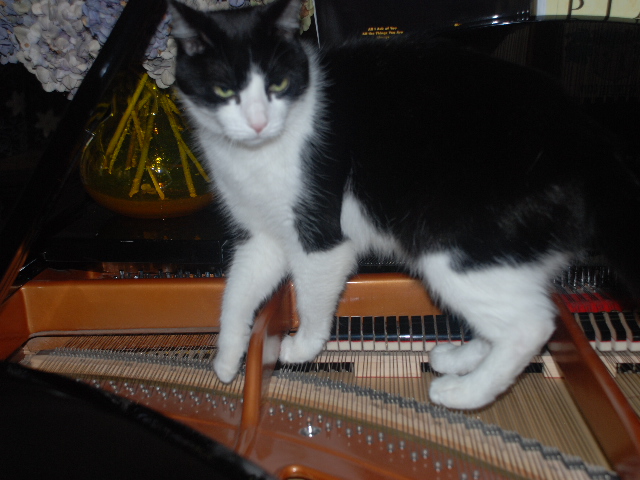 Curiosity didn’t kill the cat in this case–just hurt his paws. His name is Oreo, and he is lean and mean. The runt of the litter, he grew up fighting for life and turned out to be a real bruiser. He’s Oscar the Grouch on Sesame Street. In spite of his crotchey side, he dearly loves me and has been my best buddy for 14 years. It’s a wonderful thing to gain the affection of the king animal of aloof.

Today I looked up from my morning reading to discover that Oreo had jumped inside our grand piano. I rarely keep the lid open to the strings, but we had a concert and I opened it up and forgot it. So my curious Oreo jumped inside on the strings. His face looks like they are hurting his paws.

I scolded him and tried to shoo him away… but he was so stubborn. And I can’t imagine that his little paws felt good on that steel, but he wouldn’t leave.

In fact, he resisted me and started exploring further…

So to be really rebellious, he completely ignored me and started taking a bath right inside the piano. It was his message to me that he was in control and quite enjoying himself. I gently reached inside and picked him up. Suddenly he grew heavy and wouldn’t let me lift him out… and after a small struggle, I succeeded and placed him on the floor. With his ears back, he darted off in the opposite direction. He so doesn’t like to lose a battle.

Then he walked across the room, tipped over this basket full of warm, cuddly throws and nestled into a long morning nap… After all he has been awake for close to one hour and all this curious antics and resistance has worn him out. He’s just plain tuckered.