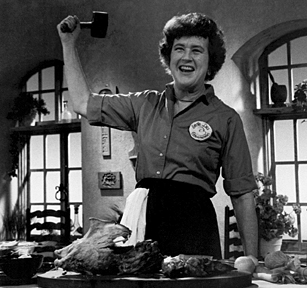 When Julia Child stumbled onto the scene as the “French Chef” in the 1960s, only the mavens of public television picked up her show. They took a risk, and it paid off! How Julia did stumble through those early shows. A great cook she was; but a tv star, she was not! Still Julia hit the challenge of tv cooking fearlessly. Undaunted, she cooked and cooked on the air until she became an icon. 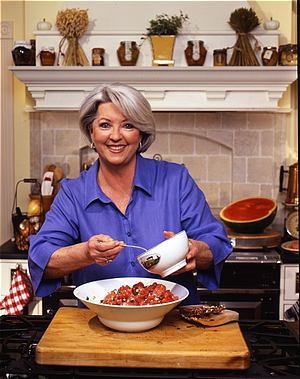 In those early days of the “French Chef,” who would have guessed that in 2010 some of the greatest stars among us in the states would be television chefs — Paula Deen, Ina Gartner, Giada de Laurentiis, Mario Batali, Tyler Florence, Bobby Flay, Alton Brown, Michael Chiarello, Rachel Ray, Emeril, Martha Stewart… and the list goes on… too long to note each one.

Who would have dreamed that these famous cooks would become an important part of American pop culture? 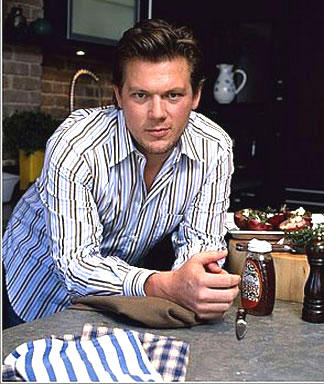 Some of these stars are not professional chefs or bakers either. They are just plain, good cooks with dazzling personalities like Paula Deen. Who can resist those blue eyes, warm Southern charm, wonderful sense of humor, and all that butter?

On some level all of them are entertaining, but I enjoy the ones that really inspire me to cook and entertain in my own home — the ones that make me want to turn the tv off and go directly to the kitchen and throw open the oven, pantry, and fridge, or the ones that make me want to plan a dinner party tonight! They make me feel like I can do it successfully and with ease. I have tried some of their recipes, and they did make me look like a star in my own digs. That is part of the reason people love them so much.

Food is wrapped up in our culture, and that is normal. The cuisine of every nation is as distinctive and important as its language and traditions. Food is a reflection of our lives as a collective people group, our religions and holidays, our families, and our tastes.

My husband and I have had the wonderful pleasure of international travel. This has given us the opportunity to sample many foods, and I must admit most of it has been amazing. Other countries are getting the food tv craze as well. When we were in Cyprus a few months ago, we saw a plethora of international tv chefs on the tube, from Jordan, Turkey, Israel, Germany, Cyprus, England, and the states. It was very interesting, especially the Middle Eastern cuisine presented.

Often things that happen in the natural are a sign of things to come in the spiritual. I hope this food revolution will turn into a spiritual revival — a hunger and thirst for God, His Word, and righteousness. Most of the world has been in a famine of those things. Some because they don’t know the Good News–have never heard it or don’t have Bibles. And some because they are tired of hearing it and cold to it!

Taste and see that the LORD is good; blessed is the man who takes refuge in him [Psalm 34:8]. The Psalmist challenges us to taste and know His goodness. It is like all foods, you never know if you like it until you take a little bite.

Jesus told the woman at the well, who was a foreigner, that he knew of water that would allow her to never thirst again.

When the we eat and drink of the good things of God, we truly know satiety — a satiety that is deeper than Paula Deen’s chicken fried steak and blackberry cobbler. It is more wonderful than Tyler Florence’s ultimate filet mignon with fried onion rings. And even better than Emeril’s clam chowder and seafood gumbo or Ina Gartner’s cream brulee.

The prophet Isaiah said that all who are hungry could come and buy without money.

Imagine that? Freely given.

Let’s dig in and taste and see that the Lord is good! As the French chef, Julia, would say, “Bon Appetite!”