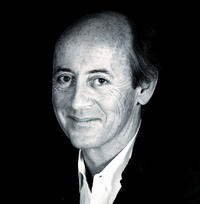 In the club car that morning I had my notebook
open on my lap and my pen uncapped,
looking every inch the writer
right down to the little writer’s frown on my face,
but there was nothing to write
about except life and death
and the low warning sound of the train whistle.
I did not want to write about the scenery
that was flashing past, cows spread over a pasture,
hay rolled up meticulously –
things you see once and will never see again.
But I kept my pen moving by drawing
over and over again
the face of a motorcyclist in profile –
for no reason I can think of –
a biker with sunglasses and a weak chin,
leaning forward, helmetless,
his long thin hair trailing behind him in the wind.
I also drew many lines to indicate speed,
to show the air becoming visible
as it broke over the biker’s face
the way it was breaking over the face
of the locomotive that was pulling me
toward Omaha and whatever lay beyond Omaha
for me and all the other stops to make
before the time would arrive to stop for good.
We must always look at things
from the point of view of eternity,
the college theologians used to insist,
from which, I imagine, we would all
appear to have speed lines trailing behind us
as we rush along the road of the world,
as we rush down the long tunnel of time –
the biker, of course, drunk on the wind,
but also the man reading by a fire,
speed lines coming off his shoulders and his book,
and the woman standing on a beach
studying the curve of horizon,
even the child asleep on a summer night,
speed lines flying from the posters of her bed,
from the white tips of the pillowcases,
and from the edges of her perfectly motionless body.