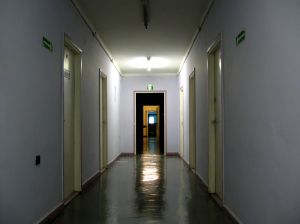 My sister-in-law, Ginger, reminded me the other day about an experience I had as a nurse. Being in the hospital with Dad’s recent illness and death reminded her of something I had told her.

I cared for an elderly man in Denver at Life Center named Mr. Sick. He was indeed sick, close to dying. Besides being elderly and frail, Mr. Sick had cancer and had had a recent stroke. He was comatose and had been so for a few weeks.

I never saw one visitor with him in all those weeks.

I dreaded caring for him. It was an ugly attitude of mine. Oh, I did a good job, cleaning him, brushing his hair, administrating his medications, and turning him every two hours, etc. But there was no exchange, no communication between us. It made his care difficult for me.

I loved and still love nursing because of the interchange between nurse and patient. It was fulfilling to encourage patients, to talk with them, and sometimes pray together.  But Mr. Sick’s condition made nursing seem like a thankless chore.

One morning I arrived at work and groaned under my breath when I discovered I had been assigned Mr. Sick’s nurse once again. I dutifully entered his room and bathed and turned him. Then suddenly the whole reality of eternity hit me hard. I wondered if Mr. Sick was eternally prepared to die. I wondered if he knew Jesus had died for his sins and was able to cover them by his blood–to give him a home in heaven.

In nursing school we had earned that although patients are comatose, their hearing is the last sense to be lost. We were encouraged to speak to comatose patients and believe they could hear and understand. I found this often hard to do, but did it occasionally with other patients.

So while I continued to work with Mr. Sick that day, I told him the whole story of the Gospel. I explained how Jesus came as a baby, lived as a boy, and became the Savior. I told how his sin and my sin had separated us from God. I quoted Scriptures about salvation, righteousness, hell, heaven, and the afterlife.

Then I asked Mr. Sick if he wanted to pray to repent of his sins, that which separated him from God. Of course, I looked for a response and saw none.

Then I prayed over him and asked God to give him peace in his soul, to come into his heart, and to prepare him for his home in heaven. I opened my eyes to see a single tear rolling down his cheek as I prayed. He never spoke or moved his hands, but that tear streamed down his face.

I knew this was Mr. Sick’s spirit receiving the words I spoke. Not because I spoke them, but because they were words of pure life that led to eternal life. It was so glorious and touching.

My attitude changed toward Mr. Sick. He became my favorite. I joyed in all of his care and treated him tenderly and lovingly as a daughter would.

The next day I ran to see if I had been assigned to be his nurse that day, and I wasn’t. As soon as I could, I slipped off my floor to his room to find that he had passed away in the night.

Jesus had taken him home.

I stood in his empty room now with tears streaming down my face for the soul who had entered heaven, prepared and ready because of the price Jesus had paid for him.

It doesn’t matter the depth of sin or the physical condition of humankind before they are destined to meet their Maker. God is not willing that anyone of us should not be ready for heaven.

World societies and cultures today despise the comatose, the near-death person. They want them gone, so the living can get on with living. I found the seeds of this very attitude in my own heart years ago.

This experience shows how valuable the last moments of a person’s life really are. How precious and life changing they can be. How critical it is for we who bear Christ’s light to keep it burning at all times.

“The wages of sin are death, but the gift of God is eternal life.”