My daughter’s outreach team in Cyprus

Our 20 year-old daughter just returned from six months in Cyprus. This was her second year in a missionary-training school. Her daddy and I spent the last couple of days getting ready for her homecoming. And when she finally walked through the door, our hearts flooded with joy. It was great to hug her and hear her tales of travel and learning experiences.

Her team just spent four weeks traveling through Germany, Czech Republic, Romania, Hungary, Slovakia, and Austria. They worked with orphans, gypsies, on the the streets, in churches, convents, you name it… They did it.

My daughter said she had never eaten so many McDonald’s hamburgers in her life. The price was right for a traveling youth team, working around Eastern Europe. 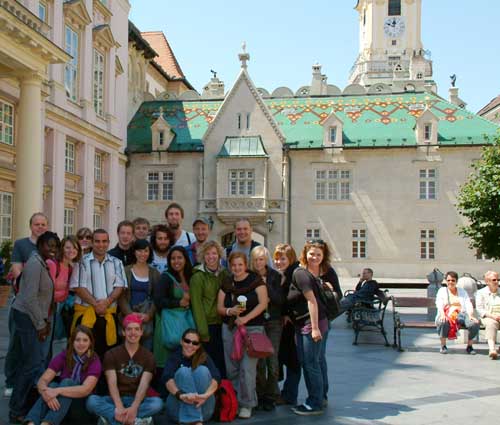 Seeing her this time reminded me of a very sweet memory. We were in Hamburg, Germany, when my daughter was just eight-years-old. Our car had been shipped from the states to the port in Hamburg. As soon as it cleared European customs, we were going to drive it back to Odessa, Ukraine. (And believe me that is another story. I will reveal in the future… )

But we first arrived in Hamburg by train from Ukraine. It took us about three days to get there, so we arrived very tired, dirty, and extremely hungry. Imagine three days and nights on a Russian train! We were also schlepping a lot of luggage and had never been in Hamburg. We lugged all our luggage into a mall that was fairly close to the train station, found a restaurant, and ate a great German meal.

When we finished my daughter and I stood outside the mall while my husband disappeared down the street to find directions and transport to the port.

Suddenly my daughter told me she had to use the restroom. There was so much luggage there that we could not both carry it back into the mall without my husband. My daughter pressed me; she was desperate to use the toilet. Then with a confident-beyond-her-years attitude and plea, she quipped, “I know the way back to the restaurant. I will go the bathroom in there by myself and come right back.”

I debated. I fretted. I prayed. It would be irresponsible to let her go on her own. We were in Europe and knew no one in Hamburg. She was only eight. She was desperate. So against my better judgment, I let her go while I stayed with the luggage. And I prayed fervently for God to protect her every second she was gone.

She was fearless and undaunted. She skipped at high speed back up to the door of the mall. She flung it opened and skipped into the dark… The second I saw her disappear I regretted my decision. I beat myself up mentally in between prayers…

And she was gone soooo long. And my husband was gone so long. And the luggage seemed suddenly too important. I was just about to leave our stupid suitcases and go find my daughter, when I spotted her skipping back from the mall, again at high speed without a care in the world.

I was so relieved and so happy to see her. I asked if she had any trouble and she said, “Nope!” and just went on skipping circles around me.

Oh, the sweet innocence of childhood.

As a young adult, she tackles life with the same joy and innocence and confidence.

As far as the skipping, I guess I haven’t seen her do that again, not since that day in Hamburg. And I am sad for that… the skipping chapter of her life closed that day.

Still in my motherly memories, I will forever picture her skipping, skipping, just skipping through life like that sweet, joyful eight-year-old.