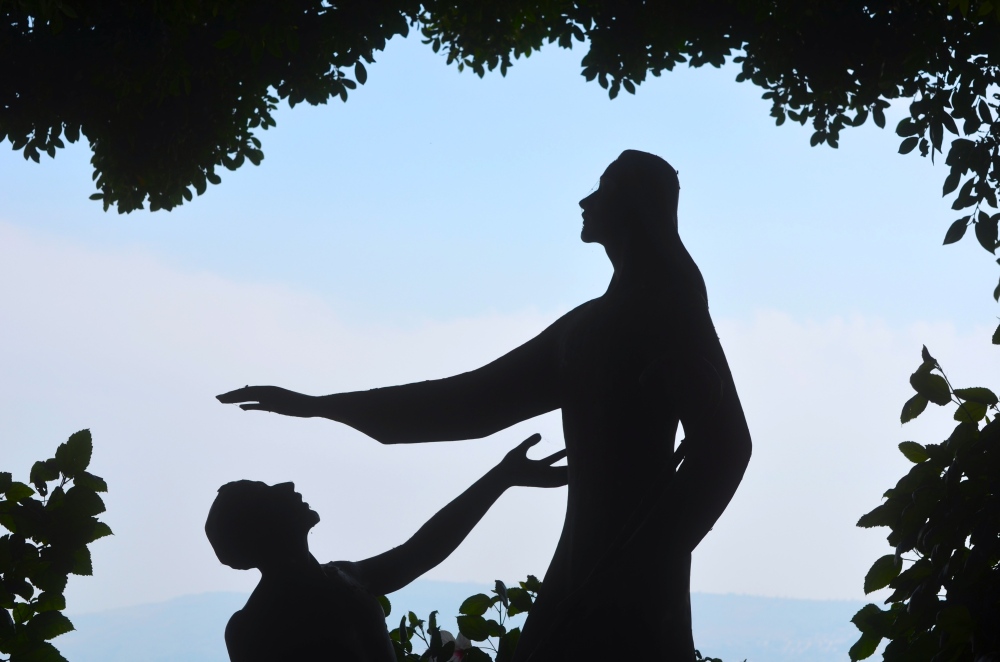 Church of the Primacy of Saint Peter on the Sea of Galilee in Tabgha, Israel. Traditional site where Jesus Christ appeared to his disciples after His resurrection. This is a statue of Jesus telling Peter to “Feed my sheep.”

A Thought by the Sea

St. Peter’s fish on the shores of the Galilee—we ate it today

with fries and Israeli salads. Did you know, Simon, that they

named a fish after you and a hundred thousand churches too?

You, Simon, called Peter, were born of John in the village of Bethsaida

and called as one of the first of Jesus’s 12 disciples. You were with

Him for the most important events: On the mountain top with Moses,

Jesus and Elijah. You saw miracle after miracle, got in the boat

with Him, believed in great faith, and then walked on water. Did you know

the Catholic and Orthodox churches venerate you? What’s that you

ask, “Why are there two churches?” One of them calls you their Father.

You would be shocked to see, to know—there are more than two

and sorrowful, all the sad turns the true and not so true followers of

Jesus made through the years. We are in fragments, split and

splitting, but we are coming back as your brothers return to the roots

of their faith. The days ahead are exciting! You would love to live

now and see this restoration! But back to those days long ago—you

who stood with Jesus at Calvary and then denied knowing Him.

How I know the agony of your pain. I denied Him too, after all He

did for me. I stood where you did and hid my face in shame. I also

me up to redemption and new life. In your case, Jesus believed in you

so strongly that He commissioned you to “Feed His sheep.” This

was the job of a lifetime after the ascension of Messiah. And you did

it so well, preaching at Pentecost and then burning on and on

until the grave end. They say you were crucified like our Lord, only

upside. Something you chose because you did not feel worthy to bleed

and die as the Lamb of God. So while on the shores of Galilee today

I paused to remember you. I stopped in reverence. I’m so like you in

many ways: messing it up, running ahead, blundering  with zeal before

wisdom, and taking big steps before tiny ones. It seems silly, as I eat

my St. Peter’s fish on the sea with the salty breeze and sun shining down

from above to think of this, but my prayer is to finish well, as you

did. As you followed the Savior, you ended your course without spot. You crossed

into glory as a martyr and hero! May I, who blunder and fail, deny and